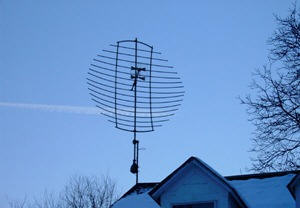 The Channel Master 4251 is generally regarded as the most powerful consumer UHF television antenna ever produced. The 4251 has acquired somewhat of a legendary status because production stopped sometime around the year 2000, and no comparable consumer antenna is sold today. It was a 7-foot parabolic dish, similar in design to a satellite dish, but designed for a different set of frequencies. The sheer size of the 4251 meant a large signal capture area, and the parabolic shape meant that it could focus and amplify signals better than any other television antenna available. Unfortunately, that sheer size also meant a large area to catch the wind. A 4251 required careful anchoring to prevent damage during high winds.

Now that the digital television conversion has created renewed demand for television antennas, I’m somewhat surprised that no company has developed a consumer parabolic UHF antenna. The awkwardness and size of the 4251 made them uncommon, but there used to be two installed in our area. The huge parabolic dish and the solid bow ties made them quite noticeable, not to mention the many guy wires anchoring them to the roof. Neither one is still installed, replaced by DISH Network and DirectTV dishes.

I was reminded of the Channel Master 4251 when I found Joe Robert’s excellent Channel Master 4251 Tribute Page. I never had a chance to see a 4251 up close, so I was intrigued by his pictures, the background information, and his story of buying his 4251. If you have any interest in classic antennas, then his page is well worth a look.