There was also a MFSK32 image at the end of the broadcast.

MFSK32 is used regularly on VOA Radiogram and MFSK64 and MFSK128 are faster modes that have been used less often. But the 8PSK125F and 8PSK250F modes were new to VOA Radiogram. 8PSK250F is over five times as fast as MFSK32.

I decoded three of the VOA Radiogram broadcasts this weekend. I decoded the 5910 kHz broadcast at 0930 UTC on Saturday (5:30 AM EDT Saturday). The 5910 kHz signal was quite strong here. Unfortunately, I neglected to set the recording level correctly. This meant that the audio level was much too loud and the high audio levels were clipped.

I used Fldigi to decode the audio anyway and came up with these results.

This wasn’t really a fair test because of the clipped audio, but it would seem to indicate that the MFSK modes deal better with clipping than the 8PSK modes. I was surprised by the good results for MFSK128. It is four times faster than MFSK32.

Here are the images I decoded from the broadcast: 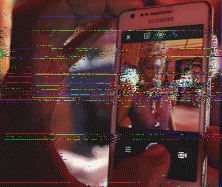 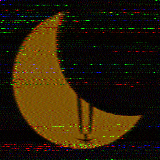 The clipping caused the first two images to be garbled, but the final two images were fine. I have no idea why they weren’t affected by the clipping.

I also decoded the 17860 kHz broadcast at 1600 UTC on Saturday at 1600 UTC (12:00 PM EDT Saturday). The signal strength of 17860 kHz was poor again here this week, but it was a bit stronger than last week. Unfortunately, the signal weakened as the broadcast continued.

I came up with these decoding results:

This doesn’t necessarily say much about MFSK128 or 8PSK250F because my reception had weakened considerably by that time in the broadcast. None of the images decoded in this broadcast.

Kim Andrew Elliott pointed out that the interference I described had similarities to shortwave jamming. Since one of the purposes of VOA Radiogram is to show how information could be broadcast into areas affected by jamming, my results might actually have significance.

I came up with these decoding results:

Here are the images I decoded: 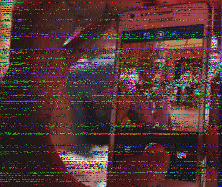 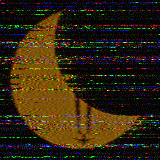 My results suggest that 8PSK125F and 8PSK250F, although quite fast, didn’t work very well at my location. I will be interested to see if they decoded better for people in other parts of the world.

WRMI also transmitted some digital images this weekend on 9955 kHz. Here is one of their MFSK32 ID’s I decoded around 1014 UTC on Saturday (6:14 AM EDT Saturday):