Earlier, I posted some of my thoughts about digital converter boxes.  There are only a few retailers in our area who will accept the converter box coupons, so the choices are limited to four units. I had already ruled out the RCA DTA800 and the Magnavox TB100MW9 for reasons detailed in my other post. This left the Insignia NS-DXA1 or the Zenith DTT900. Both are made by the same manufacturer and are said to be identical, so I felt that either one would be a good choice.

I chose the Insignia NS-DXA1, which is sold by Best Buy. Last week, I checked with the nearest store and they had plenty in stock. The final cost was $20 after using one of our converter box coupons. The cashier said that the boxes were flying off the shelves, but that they were having no problems keeping them in stock.

I am very impressed with the Insignia NS-DXA1. It is a compact black metal unit, slightly larger than a paperback book. It has ventilation holes on the top, and runs quiet and cool to the touch. Some people have complained about heat problems with the Magnavox TB100MW9, but I doubt that heat will be a problem for the NS-DXA1. 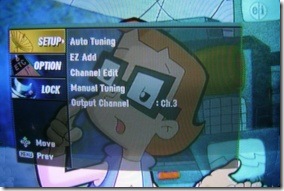 After I hooked up the NS-DXA1 and turned it on, a brief setup menu appeared. Once I confirmed some settings, it performed a channel scan. The channel scan detected five channels (four of which were sub-channels of the same station). After thanking me for completing the setup, it switched to the first channel.

I have had little experience with over-the-air digital television, and I was pleasantly surprised. The picture is sharp, the sound clear, and the reception doesn’t fade at all. Our over-the-air reception seems dismal by comparison. Only rarely does the digital signal drop out or artifact, and I am only using a simple indoor loop antenna. I am sure that a better antenna would stop any dropouts.

I knew that two stations would be strong enough for us to receive, but I had wondered about four other stations. I had expected that all of them would be too weak, but I was curious to see what kind of signal strength they had. I was surprised by the fact that not a single station had any measurable signal strength at all. This isn’t a complaint with the NS-DXA1, whose performance with low strength signals is reputed to be quite good, but rather with the state of the signals available in our area. I intend to try out an external antenna soon and I hope to get a better idea of the signal strengths. 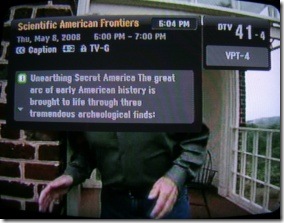 The simple program guide in the NS-DXA1 displays the name of the current program and the next program. It stores this information for each channel, and you can also see program names for a channel that you aren’t watching. However, if you haven’t watched a channel for a while, then you might have to switch back to reload its program information. You can also display a description of the program you are currently watching.

I am very pleased with the Insignia NS-DXA1. It is a well-built unit that does exactly what it promises. I like it and I plan to use our remaining coupon to buy another.