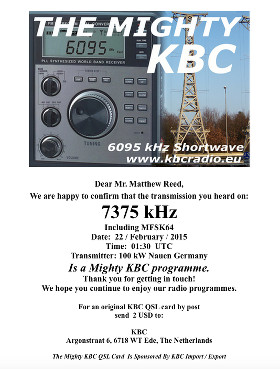 QSL card from The Mighty KBC

Here’s something I haven’t received for many years: a QSL card. Technically, it’s an electronic QSL card (sometimes called an eQSL) from The Mighty KBC, a shortwave station located in Germany.

The Mighty KBC broadcasts music programs up to two hours weekdays and seven hours weekends on 6095 kHz to Europe. But every weekend, The Mighty KBC also airs a two-hour broadcast aimed at Canada, the United States, and South America on 7375 kHz. “The Giant Jukebox” show, presented by Eric van Willegen, begins at 0000 UTC on Sunday, which is equivalent to 8:00PM EDT on Saturday.

For quite some time, The Mighty KBC has been broadcasting an image digitally during “The Giant Jukebox” show. Here’s the image of a radio that I decoded during their February 22 show:

Not too bad a decode for a signal that travelled over 3500 miles.

I sent in a reception report and received my QSL card by email. For two dollars, I could convert the eQSL card into a QSL card delivered by postal mail.

According to the email I received from The Mighty KBC, I would receive a mention in the next week’s broadcast of “The Giant Jukebox.” Unfortunately, my recording of that week’s broadcast failed, so I never got a chance to hear it.

I tried again the next week and here’s the image I decoded from “The Giant Jukebox” on March 2.

It’s not quite as clear as my previous decode, but still a decent picture of a 1971 Mercury Marquis.

Even though I have listened to shortwave radio for decades, I only ever received three QSL cards: Radio Netherlands, Deutsche Welle, and the BBC. Now I can make it four with The Mighty KBC.

4 comments on “My QSL from The Mighty KBC”